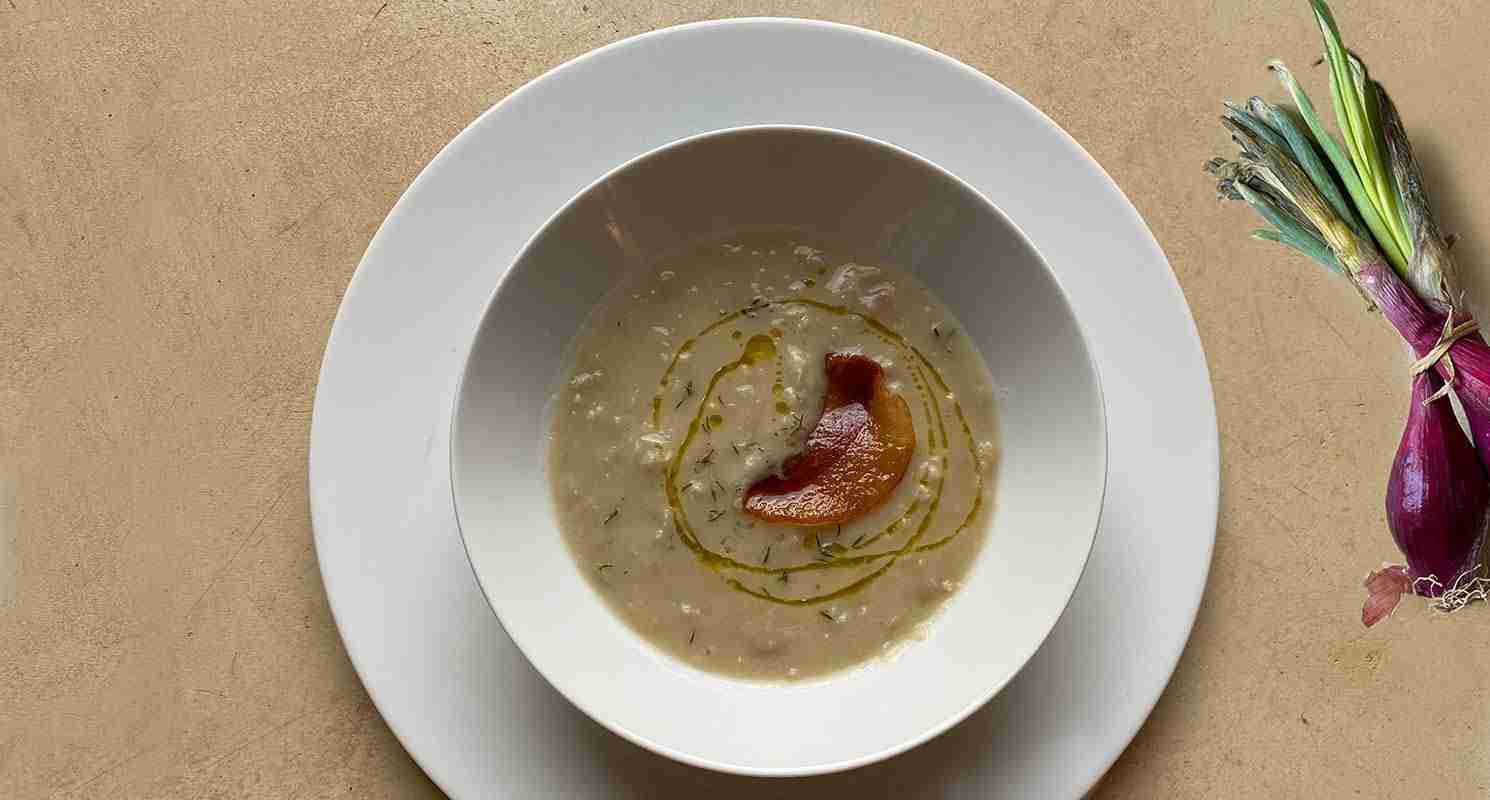 To bring to light the particular characteristics of Olea Prilis extra virgin olive oil, as well as continuing to highlight the farm’s link with the ancient Etruscan culture, we bring you another recipe made with the same ingredients that the Etruscans, being expert gourmets, used.
To study the diet of the Ancient civilisation requires researching the ingredients used in the past and bringing them back to the present. So that it’s deep seated roots can be preserved and a collective interest in caring for our surrounding land can be promoted.

Archaeological remains and findings demonstrate that even back in Etruscan civilization, meals were divided into three courses. The first course consisted mainly of soups and cereal or legume broths.

250 grams dried broad beans
2 cloves of garlic: 1 for cooking the beans and 1 for browning the bacon
Half a red onion
Olea Prilis EVOO
4 thin slices of bacon or rigatino: one for each serving
A handful of fresh thyme for garnishing
Salt to taste

Broad beans: seeds of an erect stem plant, Vicia Faba, which grows throughout the Mediterranean basin. Pulses, such as chickpeas, beans, lentils and broad beans, were abundant in Etruscan cooking which is the mother of Mediterranean cuisine. They were the daily food staple and were cultivated mainly for the use by the family rather than for selling. 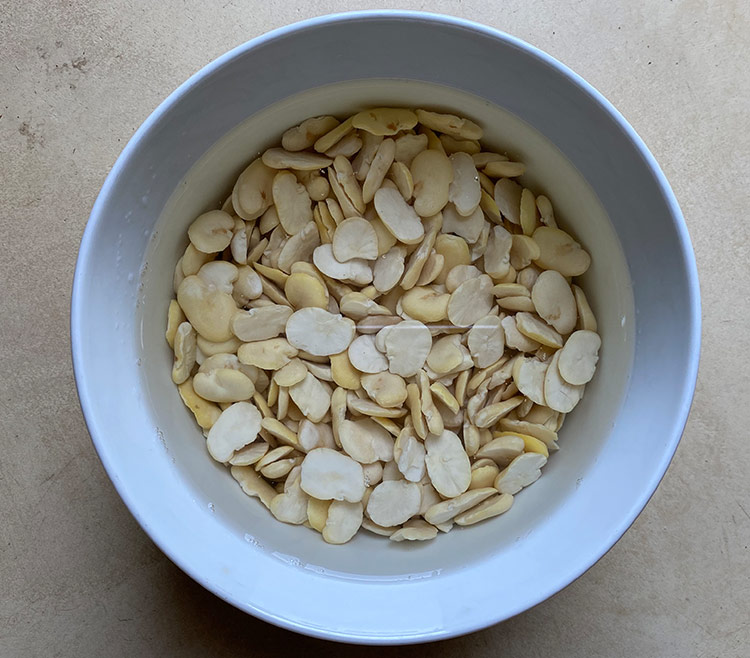 Thyme: its name derives from the Greek thymos (soul, life principle, courage). It’s a small shrub that grows spontaneously in coastal areas. The Etruscans knowingly cultivated it for its active aromatic, balsamic and antiseptic principles useful for disinfecting the respiratory tract.

Garlic and onion: were certainly used in Etruria because they grew naturally and were among the healing foods, with aphrodisiac and stimulating properties. 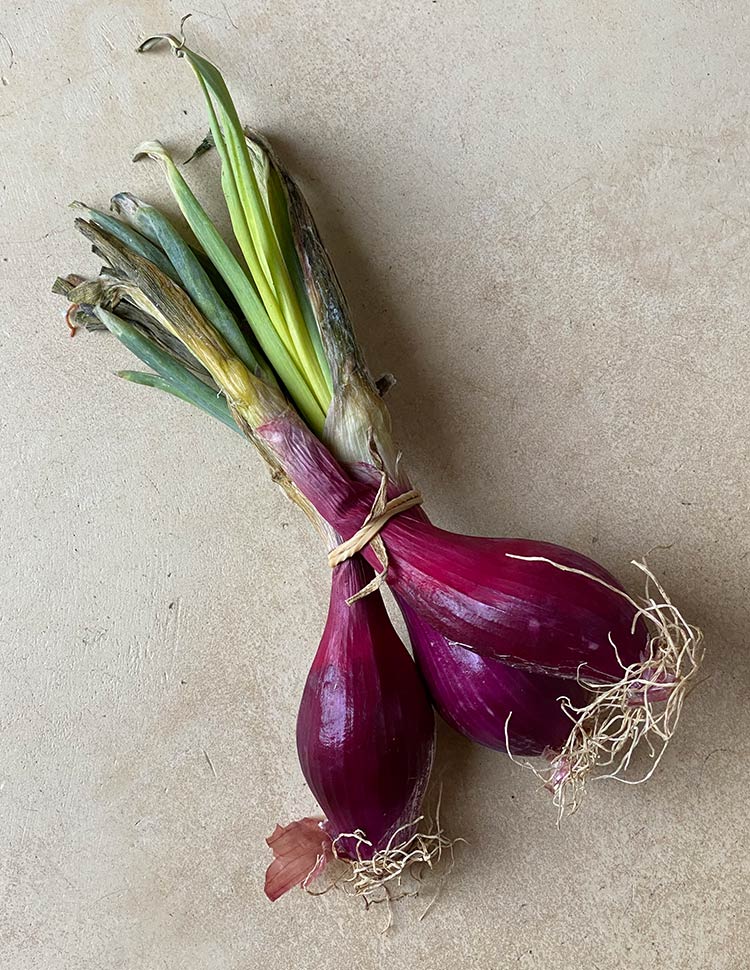 Pancetta or rigatino: several Tuscan recipes relating to pork meat preparation, like the typical “Tuscan Rigatino” date back to the Etruscan civilization. Pork was the most common meat and when the animals were two years old they were processed to make hams and sausages.

Soak the dried broad beans overnight. Rinse them well under running water before placing them in a saucepan with plenty of water together with an unpeeled clove of garlic and a pinch of coarse salt. Bring the water boil over a very low heat.

A little secret: have a second saucepan of boiling water on the ready. As soon as the beans begin to simmer and produce a white foam, transfer them to the other saucepan without letting them lose heat: in this way, they will be purged of all toxic substances and become much more digestible.
After about 1 and 1/2 hours the beans should be cooked.
The broad beans will have almost completely disintegrated but they still should be drained, keeping aside 1 cup of cooking water.

In a non-stick frying pan fry place 4 tablespoons of Olea Prilis EVOO, the other garlic clove, the red onion coarsely chopped and the 4 slices of rigatino or bacon. Sauté until golden and crispy.

Remove and set aside the fried rigatino or bacon. To flavor the broad beans, place them in the same frying pan and simmer over low heat. If you would like the soup to be less thick, then add the cup of cooking water and gently stir. Before serving, garnish each plate with a slice of bacon, a generous drizzle of Olea Prilis EVOO and a few fresh thyme leaves. 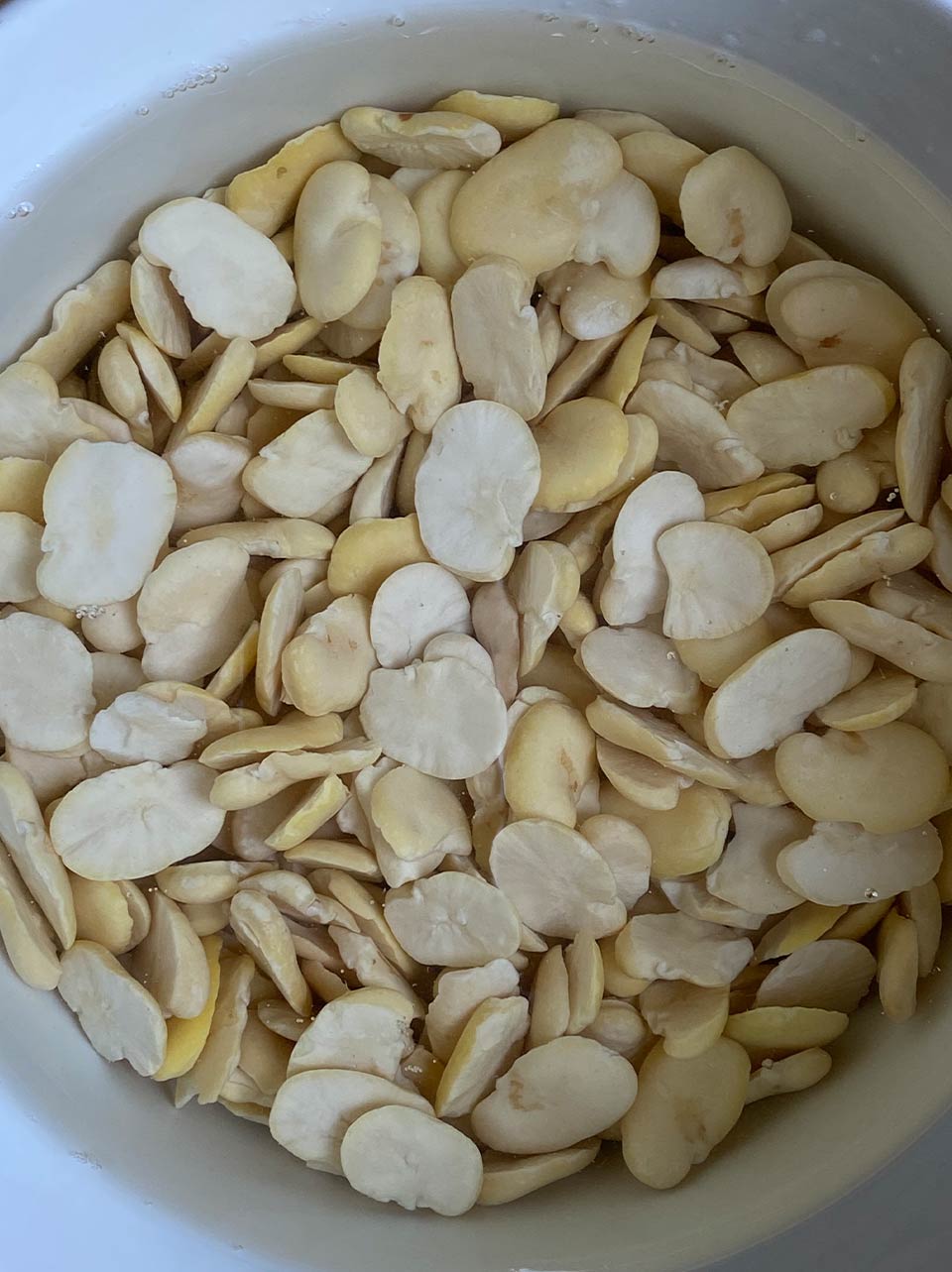 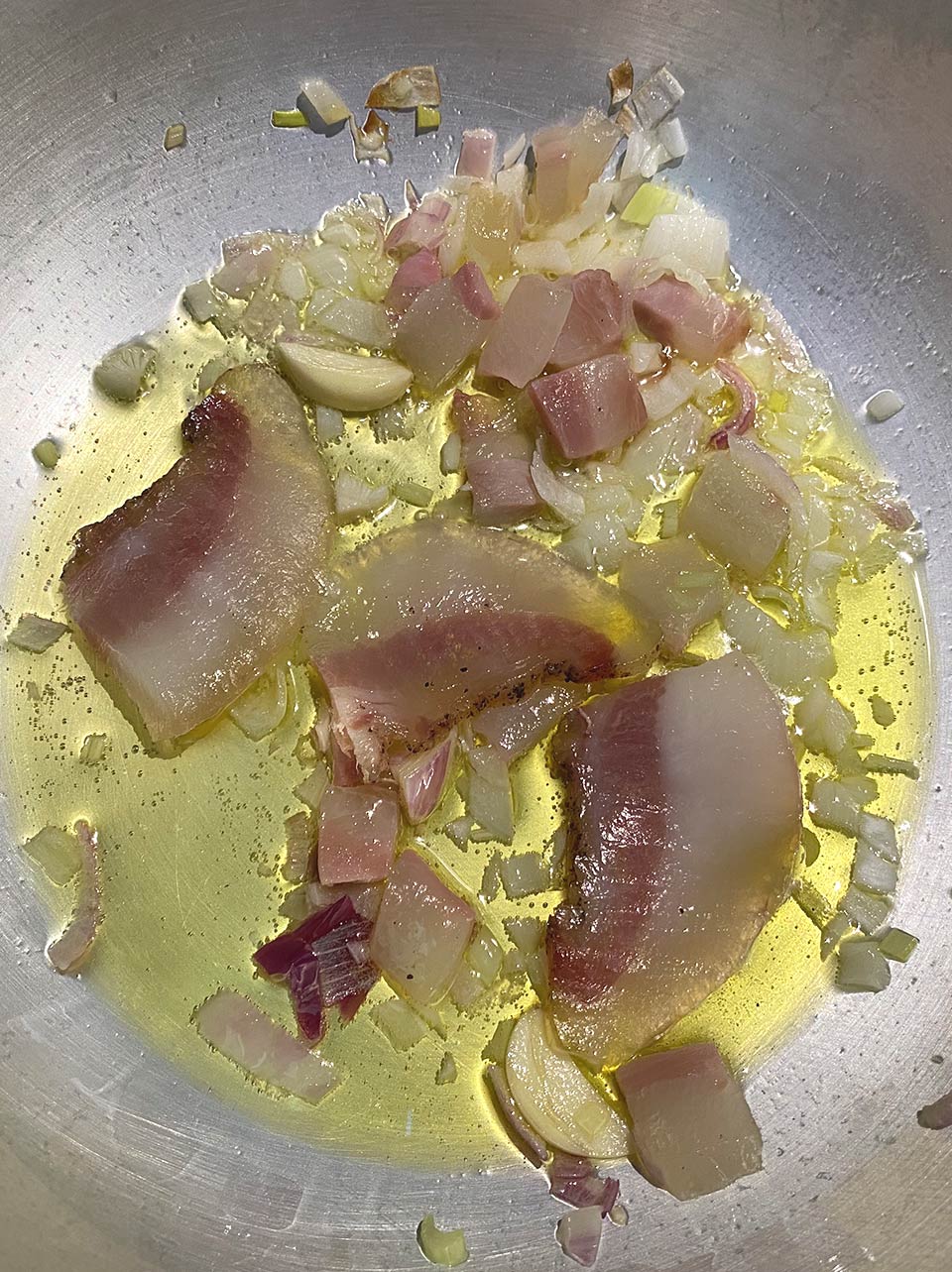 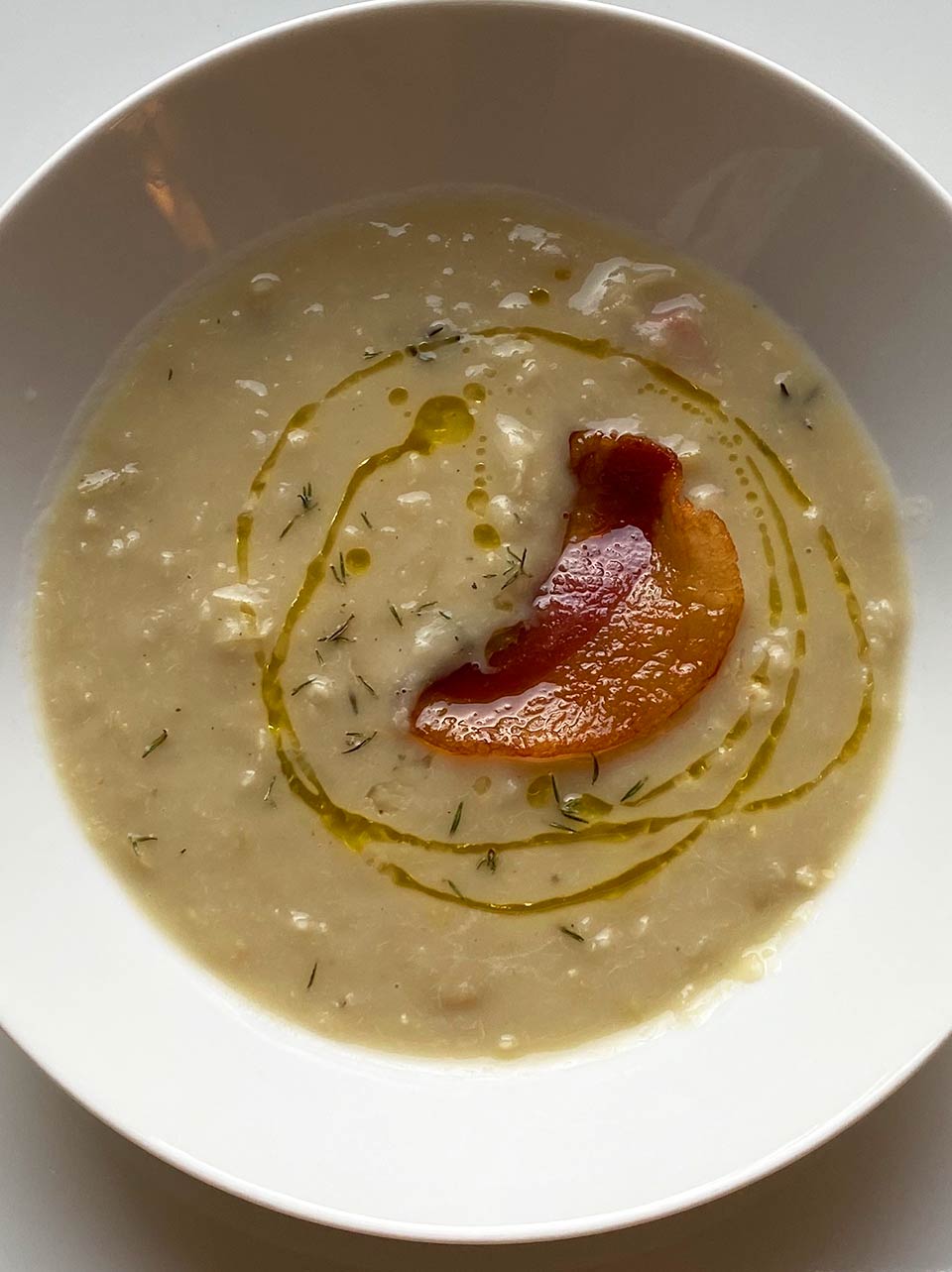 * For a vegan version that is just as tasty, simply remove the bacon from the preparation. 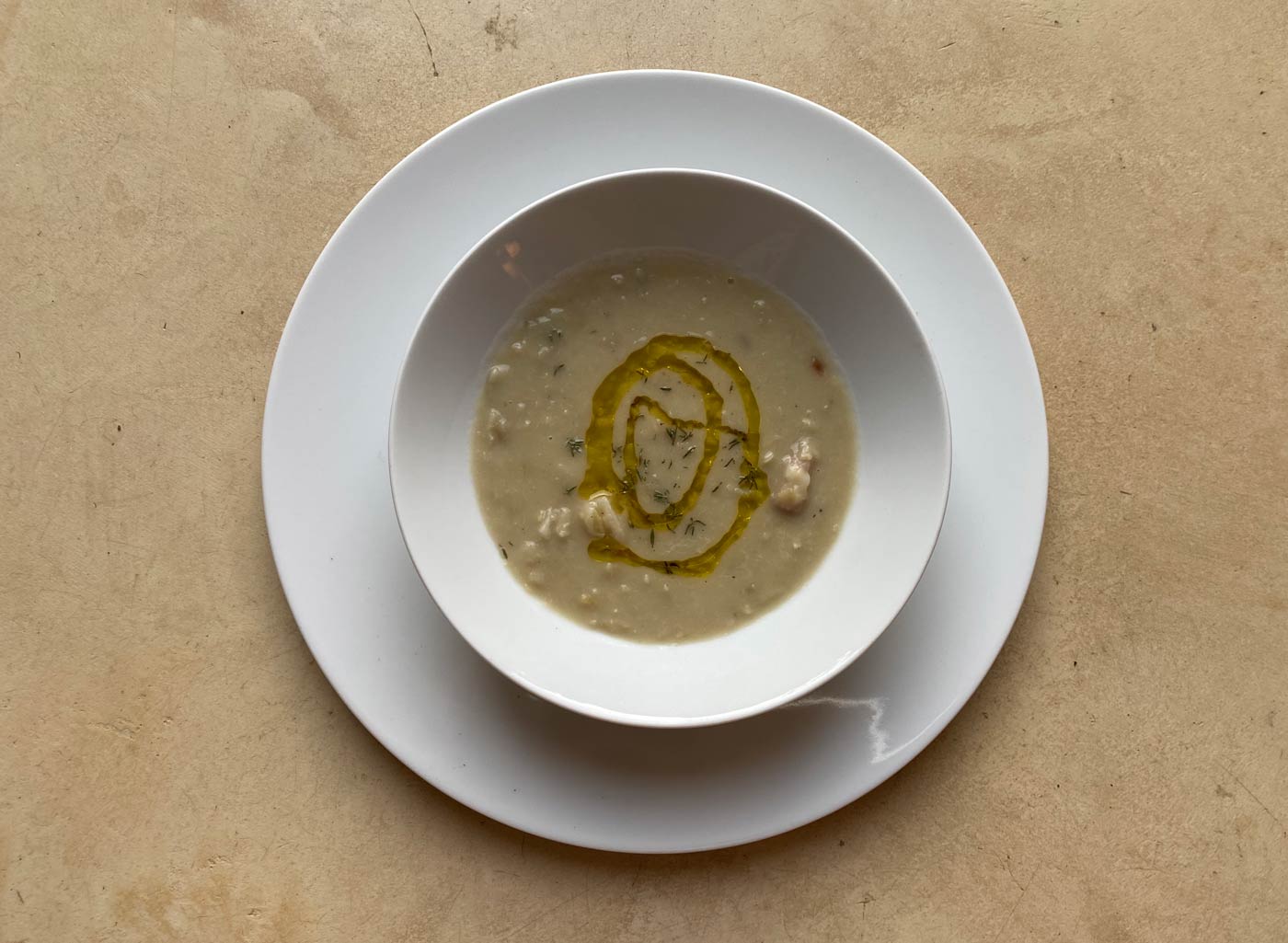 How do you tell if an extra virgin olive oil is good?

Any cookies that may not be particularly necessary for the website to function and is used specifically to collect user personal data via analytics, ads, other embedded contents are termed as non-necessary cookies. It is mandatory to procure user consent prior to running these cookies on your website.